If confused, note the date on which this was published, and enjoy!

Each episode of Veggie Tales, with very few exceptions, has a Silly Song with Larry. Even the two Singalong videos contained an original Silly Song each. So far I have not talked about them, because they are never linked, in content or theme, to the rest of the episode. This is a shame, because not only are they catchy and hilarious, but they also contain some of the most poignant and profound philosophy of the entire series.  Today I will remedy this by reviewing them as a whole; I will not be able to do each song full justice in this one post, but I will do my best. I will also include links for each. A description of the philosophy behind any work of art can never be equal to experiencing it firsthand.

The original Silly Song was “The Water Buffalo Song,” from Where’s God When I’m S-s-scared? It begins with the statement “Everybody’s got a water buffalo, yours is fast but mine is slow,” and continues to make increasingly nonsensical statements, until Archibald Asparagus charges in and interrupts. He berates Larry for falsely claiming that “everybody’s got a water buffalo.” He goes on to say that “we are going to get nasty letters saying, ‘where’s my water buffalo? Why don’t I have a water buffalo?’ and are you prepared to deal with that? I don’t think so!” The last century has seen a great increase in absurdist movements; dadaism, postmodernism, post-post-modernism and the various abstract schools of art. These movements try to remove meaning from art, or at the very least make us question how we frame our conceptions of meaning. Archibald demonstrates the futility of this, how people will continue to read meaning into chaos, that the harder artists try to avoid meaning, the harder the rest of us will try to find it. It is a criticism of the aims of Dadaism… or perhaps is it a criticism of those who would try to derive meaning where there is none? Appropriately enough for the subject matter, the point is ambiguous.

Next came “the Hairbrush Song,” in which Larry, having finished a shower, looks for his hairbrush. In the end, it was given to the Peach, by Bob, who innocently assumed that, since Larry has no hair, he had no use for it. Larry feels a deep sense of loss for an object that he had no use for, but eventually overcomes it and lets go of the hairbrush. This makes us question the value we place on objects, and how we define property rights. Is an object indelibly the property of the first person to possess it, or is it justifiable to redistribute goods based on need? Is it ever right to take from the rich and give to the poor? The point is further complicated when our attention is drawn to the role of culture in what we value. Because of the noise Larry makes in looking for his hairbrush, people constantly barge in on him and are embarrassed by the sight of him in a towel. Why? Larry is a cucumber with no private parts, and he is ordinarily naked, but the sight of him partially covered still brings to mind nudity taboos. What objects do we need only because society declares that we need them? 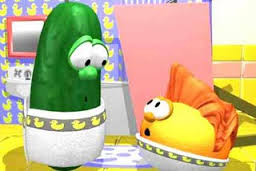 The next three songs are more socially conscious. In “Dance of the Cucumber,” exoticizing of the other is satirized when Larry puts on a stereotypical poncho and sombrero to sing in Spanish, only to turn the tables by mocking and othering Bob, his translator. In “ I Love My Lips,” Archibald tries to psychoanalyze Larry’s oral fixation, which draws attention to the simplistic approaches of classic Freudian analysis. “Oh Santa” shows us Larry as a young boy eagerly awaiting Santa, only to be disappointed three times. The first two times he expects Santa but instead gets a Viking and a bank robber who intend to victimize him, but by showing them kindness he converts them. The third time he is disappointed by Santa himself, who spies the two criminals and immediately abandons his mission to deliver toys, instead intent on punishing the two on his “naughty list.” This questions our legal system and the way it penalizes without rehabilitating, simultaneously neglecting the neediest of us who break no laws. 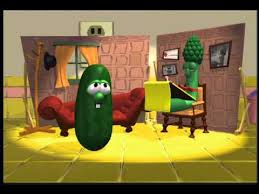 “I Love My Lips” is also the reason all conservative Christian 90s kids know the Polish word for lip.*

Then the Silly Singalong came out, and Silly Songs with Larry went meta.

The Silly Singalong contained both Silly Songs with Larry, and a mix of other great songs from previous episodes. In between the songs were spoken word sketches where Larry would mistakenly believe that they were doing a workout video, a home improvement video, and a financial success video. This seemed like just a bit, until the episode debuted a brand-new Silly Song with Larry; the famous “Pirates Who Don’t Do Anything.” It was also the first Silly Song to feature other characters as singers. Larry, Pa Grape and Mr. Lunt (who first appeared in Rack, Shack and Benny, review coming soon), all sat on a couch in pirate gear, singing about all the pirate-y things they never do. Larry broke the pattern, using his verse to describe activities ranging from “never sniffed a stink bug” to “never thrown my mashed potatoes up against a wall.”

This reveals that Larry was not making mistakes in his earlier segments, but making a point. What is a Singalong video but a means to milk cash from the public without producing anything new? In pretending he thought they were making some sort of self-help video, he was drawing the viewer’s attention to the vapid commercialism of the project in question. “You are paying us to do nothing” he was saying, “and you would be better off with one of these blatant cash cow videos that at least attempts to teach you something.” Calling himself a pirate who doesn’t do anything drove the point home. 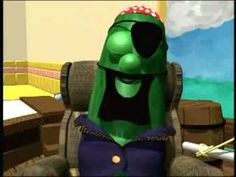 It was also an excuse to rock this look.

As he maintained his obfuscating stupidity, his cast members continued to notice none of his subversive philosophy, consistently writing him off as nothing but a buffoon. The worst offender was Archibald, the embodiment of hypocritical artistic snobbery. Archibald consistently claims to want to raise the artistic level of Veggie Tales, to class things up. He considers himself an intellectual, but his artistic endeavors have no substance to them. He seeks the trappings of sophistication, nothing more. This conflict comes to a head in back to back episodes, Josh and the Big Wall and Madame Blueberry. In the former, Larry criticizes style over substance productions in the deliberately disastrous multimedia event, “Song of the Cebu.” Archibald, naturally, misses the point completely. In Madame Blueberry, he replaces Larry’s segment with Love Songs  with Mr. Lunt. The love song that promises to be more sophisticated and poignant than Silly Songs with Larry instead is a meaningless ode to a cheeseburger.

Larry gets his own back in the next Singalong. This framing device for this one has Larry bemoaning his fate in a bar (ice cream bar, that is) while Jimmy Gourd tries to cheer him up with past songs. At the end, though, Archibald appears, claiming that the public has rallied behind Larry and demanded his reinstatement. A great irony of art is revealed; those who ostentatiously display their points often end up with less to say than those who disguise their philosophy with humor and popular appeal. The dichotomy between art and entertainment is false. True art is entertaining, because truth speaks to our hearts. Larry illustrates this for Archibald with the closing song, “Yodeling Veterinarian of the Alps.” In it, a vet gains a reputation for miraculously curing people’s pets by yodeling. Those who come to him miss the prescriptions for real medicine that the nurse hands out behind the scenes. However, when the vet mistreats his nurse, the nurse stops helping, and the vet is revealed to be incompetent. The vet, of course, is the external trappings of art, and the nurse is the meaning. Archibald, naturally, misses the point entirely.

Still, all is well, as to this day, Larry provides his subversive satire and subtle philosophy to this day. 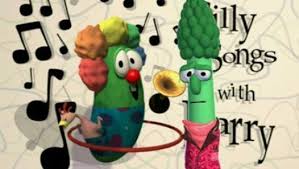 3 thoughts on “Reviewing Veggie Tales as an Atheist; Silly Songs with Larry”