I’m at the Philadelphia Trans Health Conference, and I’ve got that song from Mulan running through my head. You know the one. On the surface, the lyrics of this song reinforce many of our most problematic ideas about masculinity, including;

Yet everyone who hears this song knows it is from a movie where the protagonist is a woman.* We know the joke is on the singer, even before we see the film, but one of my favorite things about this movie is that it goes a step further than the standard gender-bending woman power stories. All too often, those stories challenge the first idea, by having a woman successfully perform masculinity, but leave the second untouched and sort of whistle awkwardly past the third. Sometimes the men are the butt of the joke for being outdone by a woman, and very often the only person worthy of her affection is the one man who really can best her. In Mulan, on the other hand, everything is taken a step further. 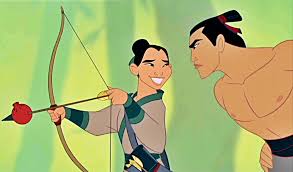 First, Mulan is, initially, terrible at fulfilling Li-Shang’s expectations… and so is everyone else. The cisgender men are all overwhelmed and struggling. The film has introduced Mulan as someone who struggles with femininity, which makes her feel inadequate, but then it dares suggest that people of all genders can struggle to live up to the idealized expectations of masculinity and femininity. When Mulan succeeds, it is celebrated because it marks a turning point for all of them. They ultimately live up to Li-Shang’s standards, not because of the inherent gifts of testosterone, but because of teamwork, persistence and loads of practice. It’s like the “masculine” ideals of strength and bravado can be fulfilled by anyone sufficiently dedicated to master them, regardless of their hormones or chromosomes. What a novel concept.

Speaking of which, I love the three soldiers who become her friends. Initially, they bully her. This is… honest. Brutally honest. In my experience, the worst gender bullies are always the ones who are insecure about their own presentation. From the Republican senator who bemoans gay rights only to be caught with a rentboy, to the scrawny nerd who trolls anyone who dares identify as both geek and woman, hypocrisy is the classic defense of the man who can neither live up to standards of masculinity, nor work up the courage to rebel against it. Because toxic masculinity is so hierarchical, it’s easy for them to decide that, if they can’t climb the ranks, at least they can make sure everyone below them stays down.

This is what her friends initially do. They are failing Li-Shang’s tests, so they make sure those around them won’t succeed and make them look bad. But Mulan refuses to play this game. Instead, she persists and, through her success, inspires them to work on themselves rather than keep putting down anyone weaker. I love that this is addressed. I love that children get to see how shitty that bullying is, and cheer for the discovery of a better way. I love the reminder that masculinity doesn’t have to be about being better than everyone else. It can be about collaborating and being better together. 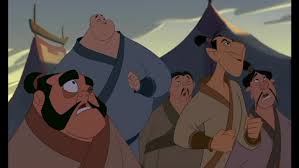 Second, the love story isn’t about Mulan finally finding a man who can defeat her, or some such sexist bullshit. In fact, Mulan never fixates on or pursues him. It’s Li-Shang’s character arc that drives the romance. He learns that his rigid concepts of gender roles are stopping him from finding true love with someone whose best traits are best recognized outside of the gender binary. Mulan is not the “Girl Worth Fighting For” they sing about (another song where sexist lyrics are deftly skewered by the context). She doesn’t need to be. Everything she is is wonderful enough.

Finally, and here’s my favorite part, Mulan never comes to perfectly embody masculinity, or femininity. She does become a much, much better warrior, but so does everyone else, and throughout the story she is more likely to use creativity and intellect to solve her problems than brute force. In the end, she returns to feminine clothing, albeit in a more subdued, gender neutral way.** The story isn’t about how she’s awesome because she’s masculine, unlike all those awful feminine women. It’s about how she’s brave, smart, resourceful and loyal; heroic traits that can go with any gender presentation. 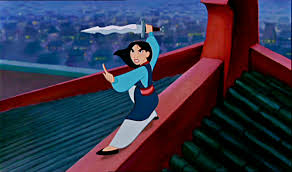 I want to do many more reviews of stories that explore gender, and especially explore how we tell stories about masculinity; how we spread toxic messages, and how we can do better. But for now, I’m off to hang out with awesome trans-spectrum type folk. If you have any requests for gender-centric stories that you want me to review, please leave a comment. Films are preferred, because it’s easier for me to find the time to watch and rewatch them, but if there are books or TV shows or anything else I’ll do my best. As always, thanks for reading!

*Her portrayal is consistent with just about any gender identity, including trans male and nonbinary. That is to say, she never says anything about who she feels she is, but rather about her sense of duty to her family, so you can read into the story what you want. I’ll refer to her with female pronouns, because that’s what she uses in-story, but I support all headcanons.

**Okay, okay, my personal headcanon is that today she would label herself genderfluid or a gender non-conforming woman. This is largely because she seems clearly uncomfortable with her initial attempts at performing extreme femininity, but not at the end when she is presenting as a woman again. I don’t think she would have looked as happy if she didn’t feel that “woman” was at least partially true to who she was. But that’s just my interpretation.